It took me about ten months to read the script for a CBC radio show about Peter Bryce produced in 1976 called The Story of a National Crime. As I mentioned in last week’s post, a producer named Peter Haworth had stumbled across Peter H. Bryce’s story while working on another program about Duncan Campbell Scott. One of the curious aspects of Haworth’s story is his account of trying to find information about Peter H Bryce and discovering a file that had been cleaned out of vital information.

I had been given the script by my second cousin, Mary Robinson Ramsay. Her father Jock Robinson had gathered material about Peter H Bryce and Mary had found the file while clearing out his belongings just a couple of years ago. She gave me the file at a family reunion in August 2014 and I had quickly gone through the contents, and then put it away while I tended to more pressing issues. When I finally got around to reading the script, I was surprised by Haworth’s story and as I outlined last week, was inspired to look at the file myself

Meanwhile I began a search for a copy of the radio show. After talking to Deborah Wilson at CBC Victoria, I tracked down the CBC archivist who as it turned out, was away on paternity leave. I sent him an email and a couple of months later, he returned to work and took a look for it. From the script I had vital information: the name of the show, its production date, and the names of the producers – Peter Haworth and Norman Newton. I was sure CBC would have it but the archivist got back to me a few days later with disappointing news – there was no copy of the show at CBC.

Let’s fast forward to this morning when I was rooting around the B.C. Archive. Early on in my genealogical research I had searched the Archive for information about my grandfather who had worked in B.C. about one hundred years ago. I found more references to Peter Bryce (his father) instead, and that was when I realized there was much more to Peter’s story. I have gone off in a number of directions since then, but until this morning had not returned to the B.C. Archive. This time I struck gold – I found a record of a sound recording of “The Story of a National Crime.” How ironic that this valuable resource sits in the B.C. Archive, just a ten minute drive from my home. 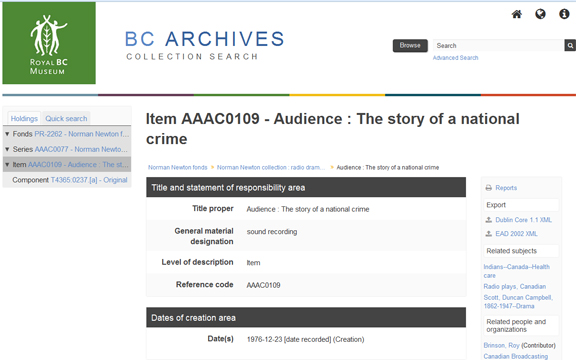 It turns out that producer Norman Newton who lived and died in B.C., had donated his files to the Archive, and among them is the above recording.   The B.C. Archive record clears up a couple of details which may have hampered the CBC Archivist. The airdate on B.C. Archive record is December 23, 1976. I had assumed the production date of November 13, 1976 which was on the script, would be the airdate. More importantly, I discovered that the documentary was produced for a series called Audience, which was produced at CBC Vancouver.

In terms of our documentary Finding Peter Bryce, this will give us a valuable element to the story. As well, the Archive also has a copy of the radio show on Duncan Campbell Scott, another valuable resource. But more importantly there is a collection of Norman Newton’s material. Both Newton and Haworth are dead; Newton died three years ago and Haworth passed away just last year. That collection may have information on the production of “The Story of a National Crime,” and may fill out another part of the Peter Bryce story. The journey to find Peter Bryce continues with more archival research.